Since my previous post I have undertaken some more detailed research into the French troops that held Linselles and Le Blaton when Lake’s Guards brigade attacked.

From the French perspective, the action at Linselles on the 18th August 1793, was led by three French Generals, Macdonald, Jourdan and Béru. Dupuis gives the order of battle for the French Army on the 30th July 1793. The infantry is largely organised into provisional demi-brigades comprising an old regular battalion combined with two Volunteer battalions.

The Camp of Madelaine to the north of Lille contained 8 such demi-brigades. In addition a new Division was created under the command of General de Brigade Béru. This division comprised the following units;

of these, on the 18th, the demi-brigade comprising the 1st St. Denis Volunteers; 1st Bn/19th Infantry Regiment; 6th Paris Volunteers together with the 3rd Franc battalion and the 15th Light Infantry battalion, from Jourdan’s command were dispatched to attack Roubaix under the command of General Desroques.

It is known that Jourdan himself led the demi-brigade of the 1st/45th Regiment to Linselles, including the 5th Vosges and 10th Paris Volunteers.

This left Béru with the demi-brigade comprising the 10th de Seine-et-Oise Volunteers,  the  1st/47th Regiment  &  the 2nd Vienne Volunteers, together with the 2nd Paris Volunteers.

The 2nd Bn/12th Infantry Regiment and the 1st d’Allier Volunteers were sent by Adjutant General Dupont from the Camp de Madelaine, while the third battalion of the demi-brigade, the 8th Paris (Sainte Marguerite) Volunteers were at Mouvaux on this day.

The strengths of the 9 battalions at Linselles can be estimated from the Situations reproduced by Depuis;

To close here are some photographs of another game at a recent Sons of Simon de Montfort club night. In this game the French forsook the shelter of the defensive works in an attempt to overwhelm the Guards Brigade; 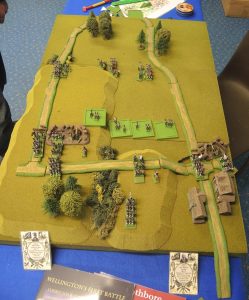 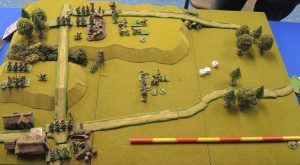